Monday, June 10, 2019 probably will never be forgotten at COSON House in Ikeja, the magnificent headquarters of Nigeria’s most successful organization in the creative arts, Copyright Society of Nigeria (COSON).

At exactly 12.30 pm, everything froze in the edifice and everyone stood still in silence. It was exactly at 12.30 pm on June 10, 2018 that the much beloved Nigerian reggae toaster and iconic musician, the Rub-a-Dub Master, Ras Kimono passed on.

Despite the morning rain, friends, colleagues, family members and a powerful media complement from far and near showed up at COSON House to attend the Ras Kimono Memorial Lecture, the first of the two big events organized on a day that henceforth will be known as Ras Kimono Memorial Day in celebration of the revolutionary musician who touched the consciousness of many.

The Ras Kimono Memorial Lecture was a serious event articulated in a very special way by Chief Tony Okoroji, Nigeria’s master of unforgettable events. Amidst lights and sounds, the event was entertaining, educative, informative and so intricately woven that everyone was gripped by its many colours and when it was over, there was a huge applause and people wanted more.

Prof Egerton Uvieghara, the nation’s Doyen of Labour and Intellectual Property law and the first Chairman of the NCC who chaired the lecture said that he was present to identify with a fellow Delta man and a remarkable Nigerian who left a glowing impression in the hearts of his countrymen.

The multi-media citation that brought to the podium the Fellow of the Nigerian Academy of Letters, Prof Duro Oni who until recently was a Deputy Vice Chancellor at the University of Lagos was so electrifying that the very widely travelled professor exclaimed that he had never seen anything like it.

In his lecture titled ‘Revolutionary Music for Equality & Justice’, Prof Oni said that throughout history, artistes and songwriters have used music to express their feelings for equality and justice in the society. In his words, “as far back as the trans-atlantic slave trade, the ‘spirituals’ of the Negros were songs of emotions and ‘protest’ that gave a voice to their oppressions. Revolutionary music gained a platform through popular culture.  It offered an awakening and reckoning of the times and has continued to have a renewed relevance and resonance today. There is no denying the power of music as a revolutionary weapon and social commentary in the society. These songs are often situational, sometimes abstract, or cognitive in content. On a whole, the artistes are in opposition to thestatus quo expressing, in more general terms, opposition to injustice and support for peace and justice”.

Said Prof Oni about Ras Kimono, “the dreadlocked legend lived and breathed reggae in all of its entirety. He used the genre to speak, without ceasing, of the ills of the land and to fight the cause of the oppressed. He spoke of the need for Africans to intellectually repel colonialism and its arbitrary boundaries between tribes. Most controversially, he was not averse to naming directly those in power he saw as synonymous with backdoor imperialism. Ras Kimono was a great influence on the ‘generation next’ of reggae musicians. Inspite of the dwindling fortune of reggae in the twilight of his life, he kept the flag of reggae at bay like a blind loyalist, continuing to charge the young ones to use the genre to speak truth to power. Kimono was an advocate of the people. He was the mouthpiece of the common man in all ramifications. He had a grasp of the pulse of the tribulations of the downtrodden.

He once said in an interview that ‘I live where the people live so I can see the tribulation they are going through; suffering and the humiliation, so we can put it into our music and expose it.’”

Some of the highlights of the Memorial Lecture were the presentation on the COSON House mega screen of “Good-Bye Ras Kimono”, an updated version of the much talked about multi-dimensional documentary on the life and times of Ras Kimono scripted and produced by Chief Tony Okoroji. At the event there was also a passing of the torch as a new era of the Kimono legacy with the launch by multi linguist and iconic broadcaster, Prince Bisi Olatilo of the 1st ever album of Kimono’s daughter, Oge Kimono, titled, “Good Ole Days”.

Oge Kimono had effusive praise for all the people who had come together to honour her father. She promised that she will not let them down or denigrate the legacy.

The Master of Ceremonies at the event was one of Nigeria’s best, Koffi Idowu-Nuel better known as Koffi Tha Guru. He held everyone spell bound. 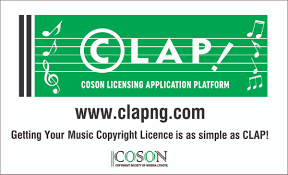