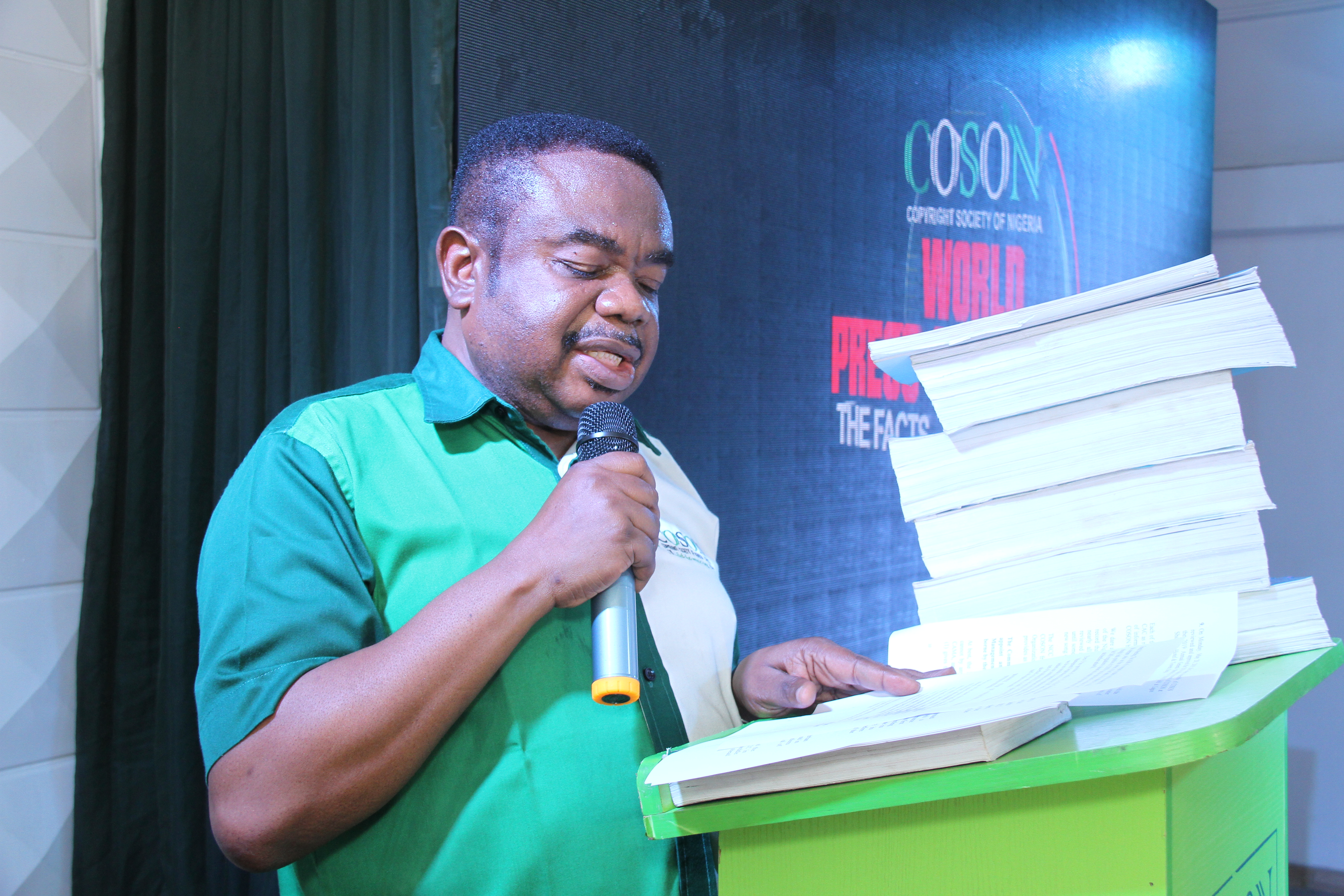 At a very well attended  World Press Conference held this Tuesday, March 10, 2020 at COSON House, Ikeja, COSON said that If Mr. John Asein does not resign, COSON is calling on the Head of Service of the Federation, Mrs. Folashade Yemi Esan, .the Chairman, ICPC,  Prof. Bolaji Owasanoye, the Attorney-General of the Federation, & Minister of Justice, Mr. Abubakar Malami; Chairman, Presidential Advisory Committee Against Corruption, Prof Itse Sagay, to ensure that Mr. Asein is suspended from office, properly investigated and prosecuted  so that President Buhari’s anti-corruption stand is not seen by the world as a joke.

According to Chief Tony Okoroji who spoke on behalf of COSON, “if these Nigerians fail to take the action which is their duty to take, we have lawyers who are ready to obtain the necessary fiat to forcefully prosecute Mr. Asein”.

According to Okoroji, after the founding fathers of the NCC established this very important organization, it has been inflicted with very bad and weak leadership. Unfortunately, rather than fight piracy of Nigerian creative works and other types of copyright infringement for which the organization was set up, it is the strongly held opinion of COSON that the NCC has become a den of thieves and the crucible of scams. The interest of the NCC leadership appears to be to grab all “grabables” from everywhere which is why they descended ferociously on COSON”

According to Chief Okoroji, when in January 2019, it was announced that John Ohireime Asein had been appointed Director-General of the Nigerian Copyright Commission, many hoped that the fortunes of the NCC would change and the instability in the organization will come to an end. Unfortunately, that hope has been dashed.

At the COSON conference, it was alleged that there is ample evidence that John Ohireime Asein with IPPIS No 101108 may have continued to collect salaries from the Nigerian Copyright Commission several months into 2016 after retiring as staff of the commission on December 31, 2015. It was alleged that there is evidence that for the months of January, February, March and April 2016, Mr. Asein unlawfully earned income of N502,271.00 in each of the months from the Federal Government. Stating that the behaviour is clearly fraudulent and criminal Chief Okoroji said that Mr. Asein deserves to be fully investigated and if he is found liable, prosecuted.

It was also alleged that there is ample evidence that Mr. Asein who from January 10, 2017 to January 8, 2019 held the position of Executive Director of Reprographic Rights Organization of Nigeria (REPRONIG), a collective management organization regulated by the NCC which it was said not be known to have ever distributed even one kobo to any of its members or filed a proper audited account, has continued to act on behalf of REPRONIG, write letters on behalf of REPRONIG while DG of NCC, manage the funds provided by international donor agencies such as WIPO, IFFRO, NORCODE, KOPINOR, etc., to REPRONIG and act as sole signatory to the REPRONIG UBA account No 2004467988 and make payments on behalf of the organization, long after assuming the position of Director-General of the Nigerian Copyright Commission.

It was alleged that more than one year after he assumed office as DG of the NCC, Mr. Asein is still listed on www.repronig.ng, the website of REPRONIG, as Executive Director of REPRONIG. Said Chief Okoroji, “in effect, Mr. Asein is at the same time both the Head of REPRONIG, an organization regulated by the NCC and Head of the regulatory agency, the NCC! This is a bewildering example of conflict of interest with extensive consequences. There is no question that this deserves to be investigated and the investigation must cover how the millions of Naira in grants to REPRONIG by different donor agencies have been disbursed by John Ohireime Asein, sole signatory to the REPRONIG account”.

It was further alleged that at the same time that John Ohireime Asein is a Public Servant, he is also a Director of a private company known as Books & Gavel Ltd which is prohibited under the Public Service Rules.

The conference was informed that there remains significant lack of transparency in the controversial deal between the Nigerian Copyright Commission (NCC), Agency Francaise De Development (AFD), Isioma Idigbe’s Punuka Attorneys and KPMG brokered by Mr. John Asein. Said Okoroji, “Unfortunately, nobody at the NCC except Mr. Asein appears to have any full detail of the deal or the money involved. This ought not be so as the NCC is a full-fledged commission of the Federal Government with a Board and not the personal property of Mr. John Asein. The answer to the question, how much is involved in the deal and who received what from whom in this contentious deal, is still blowing in the wind. It is the strongly held opinion of COSON that the NCC/AFD/Punuka/KPMG deal needs to be investigated and the details uncovered”

Said Chief Okoroji, “on these issues, there will be no retreat and no surrender. Let me state unequivocally that we will deploy all the lawful resources available to us until the whole world hears us and the issues raised here are addressed.

“We owe it to our children” said the former President of PMAN.