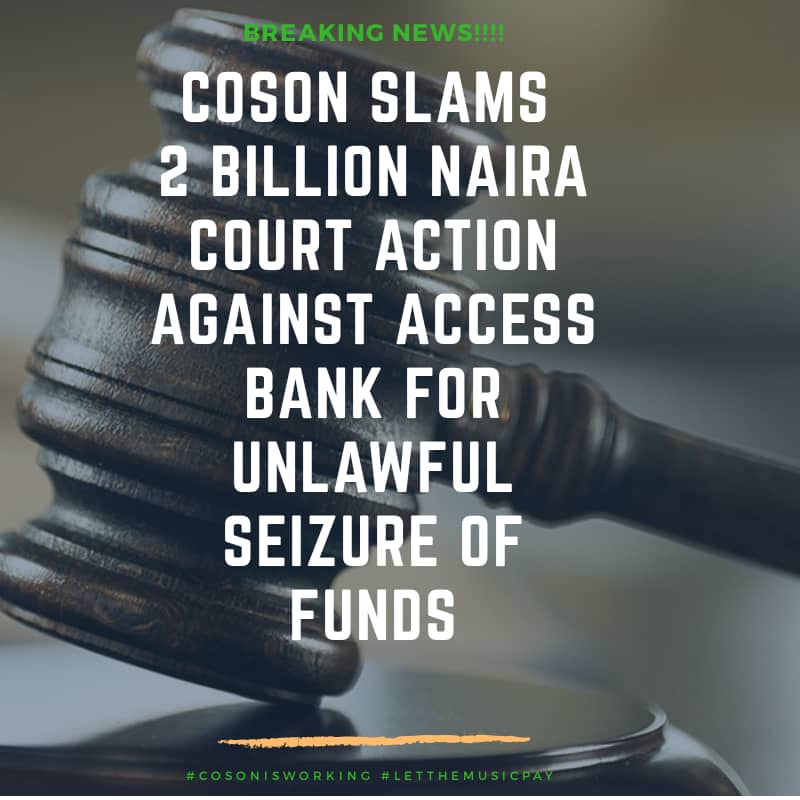 Copyright Society of Nigeria (COSON), one of Africa’s foremost copyright collective management organizations for musical works and sound recordings, has filed an action at the Federal High Court Lagos against Access Bank PLC claiming the sum of two billion naira for the unlawful freezing of the accounts of the society.

The suit No FHC/L/CS/1777/2019 which was filed this Tuesday, October 8 by Mr. James Ononiwu of the top Lagos law firm of Whitedove Solicitors is accompanied by a 40 paragraph Statement of Claim and 18 exhibits.

In the suit, COSON is asking for a declaration that the freezing of its accounts with Access Bank without any court order whatsoever is illegal, unlawful, null and void.

The organization which pays royalties to musicians across the country has also asked the Federal High Court for an order directing Access Bank to immediately unfreeze the Plaintiff’s accounts with the bank, frozen without any court order whatsoever and release all restrictions placed on the Plaintiff from running its accounts.

The copyright organization said that it verily believes that if the Court does not intervene to put a stop to the vicious behavior of the bank to COSON, the bank will be emboldened to continue to be lawless and to seize the funds belonging to other of its customers without any court order whatsoever.

In a related development, COSON lawyer, Mr. James Ononiwu who filed the suit, said, “I have said it several times that anyone, no matter who he is or what institution he represents, that lands one blow at COSON will receive five hot blows in return. The members of COSON are determined that no one will intimidate or crush this great Nigerian institution of creative people. They have told us to follow anyone who wishes to mess with COSON anywhere, to the Supreme Court and back. That is our brief and that is a brief we hold dear to our hearts. We join members of COSON across Nigeria in saying, ‘Let the music pay!’”